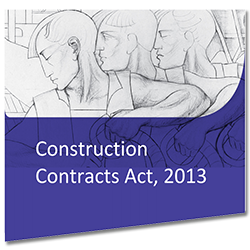 One of the biggest changes in the construction industry in recent years took place with the introduction of the Construction Contracts Act 2013. In order to expedite the payment process within the Construction Industry, the Act introduces a new dispute resolution process called Adjudication. This process provides a temporarily binding decision within 28 to 42 days and also results in significantly reduced costs to the complainant. The provisions of the Construction Contracts Act, 2013 provide, subject to some exceptions, new legal rights and obligations on the parties to a construction contract. The Act imposes new minimum contractual provisions in relation to payments arising under a construction contract. If a payment dispute does arise between the parties, either party will have the right to refer the payment dispute for adjudication, which will be concluded within a set time frame.

As accredited mediators with substantial experience in mediation we are the leading adjudication experts in Cork and if you have any questions about any part of the process please contact us directly and we’ll be delighted to help.

In accordance with the Act, a construction contract shall also provide for:

A payment dispute for the purposes of the Act is any dispute relating to payment arising under the construction contract. Adjudication as a dispute resolution methodology provides a mechanism for resolution of a payment dispute where the dispute is referred by one of the parties to an independent third party, an Adjudicator, who will make a decision on the dispute.
Section 6 of the Construction Contracts Act, 2013 provides a right for any party to a construction contract to refer a payment dispute for adjudication. The Minister of State for Employment and Small Business at the Department of Jobs, Enterprise and Innovation has published a Code of Practice governing the conduct of adjudications under section 9 of the Construction Contracts Act, 2013. The Code of Practice is binding on all Adjudicators operating under the Construction Contracts Act, 2013 in accordance with section 6(8) of the Act.

How Is An Adjudicator Appointed?

What is the status of an Adjudicator’s decision?

The decision of an Adjudicator is binding on the parties to the payment dispute unless the parties make a final settlement of their dispute or a different decision is reached in the event that the payment dispute is referred to arbitration or to a court of law. The decision of an Adjudicator, if binding, is enforceable either by action or, by leave of the High Court, in the same manner as a judgement or order of that Court with the same effect and, where leave is given, judgement may be entered in the terms of the decision.

Contact Us And Find Out How We Can Help You